When the Ardbeg Wee Beastie was firstly exposed to the public (via the USA bottle label), I got very curious about it for it could be a brilliant marketing move. Or a fiasco.

The last official core range release from Ardbeg was Ardbeg An Oa which was a decent introductory offering for those who are afraid of ‘pure’ Ardbeg peat experience, but was priced a bit high and didn’t appeal many of the hard code Ardbeg fans.

It’s clear that Ardbeg wants to shift demand and our attention from the regular core line up offers and nudge Ardbegians and peat heads toward a young offering that retains the ARdbeg characteristics to elevate pressure on the mature stock. We saw how long it took Ardbeg to release a real mature product (the 19 Year Old Traigh Bhan last year) and they are doing it in small batches and different flavors between batches (due to lack of consistent old stock).

So the Wee Beastie is what Ardbeg hope will captivate the fans as a proper Ardbeg offer and reduce the pressure on the mature stock. For this purpose, this whisky was matured in Ex-Bourbon and Oloroso Sherry Casks and bottled at a slightly higher ABV then the usual of 47.4% (a Wee ABV or Beastie?)

It was due to go on sale in the UK around the Feis Ile Festival which got cancelled but the UK launch time remains similar and it should hit the shelves there sooner than later. However, In Europe it hit the shelves in some markets a month ago and went on sale for ~€40 but initial stock got sold out in a hurry in most places and a few stores have it in a slightly higher price (until next batch/stock is released). 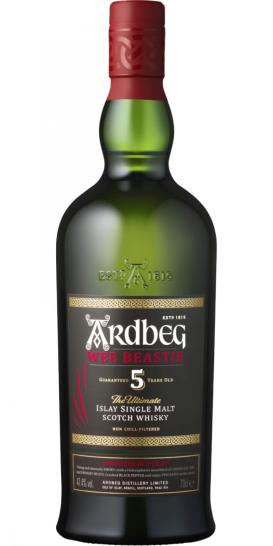 Since 2001 Diageo are showcasing their enormous portfolio of distilleries in their Special Releases series. In the coming weeks we’ll cover here a few of the 2019 releases, starting today with this Cardhu 14 Year Old.

We don’t get to see too many Cardhus out there. There are the staple 12 Year Old and the Gold Reserve but outside these it’s quite rare, especially Cask Strength offerings where the last tone was released back in 2013.

This 14 Year Old Cardhu was matured in Amontillado sherry casks, 4,872 bottles were produced and bottled at 55% and the art work for it and the entire series is magnificent!

Nose: Sour fruits with a touch of nuttiness, honey, sweet barley, caramel and toffee. Then a bowl of fruits – pears, peaches and apples with sweet berries sauce, After a few minutes it develops a more nutty profile with cinnamon, cashew and almonds and eventually becoming herbal. END_OF_DOCUMENT_TOKEN_TO_BE_REPLACED

After reviewing Arran Sherry Cask which is a core range offering, we move on to a limited edition expression – Arran Master of Distilling 2 which is a 12 year old whisky finished in Palo Cortado sherry casks picked by James MacTaggart, Arran’s Master Distiller, in Spain.

James MacTaggart has over 40 years’ experience in whisky production. In 2017 we had Arran 10 Year Old (Master of Distilling I) to celebrate a decade since he joined Arran in 2007 and now we have this second edition (released in 2019) to celebrate a dozen years. 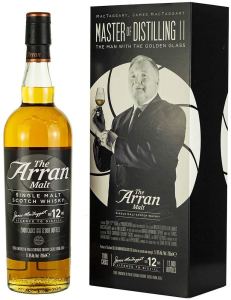 This week we’ll cover a trio of (relatively) recently released Arran whiskies. The first one we’ll cover is a member of the revamped line up Arran launched late 2019 – Arran Sherry Cask which is a cask strength with no age statement whisky – Another addition to the jammed collection of young Sherry bombs on the shelves. 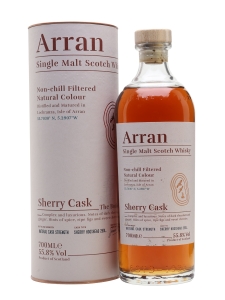 Palate: Far sweeter and fruitier with red berries and blueberry, mandarins, ginger, minerals and rock dust, chocolate and it’s all quite drying. With a few drops of water it becomes a bit woody and there’s espresso, bitter cinnamon, dark chocolate and less fruitiness.

Thoughts: I quite love it. The fresh fruitiness offers a different look at the genre and the minerality adds a lovely depth and it offers a refreshing and different flavors profile comparing to other CS NAS sherried offerings.

Kilkerran 8 Year Old is the young cask strength offering from Glengyle distillery. So far there have been 4 batches of this whisky (first batch was checked back in 2017 here).

But the last batch (No. 4) deviated from the road paved by the first 3 batches and offers a sherry matured Kilkerran 8 Year Old instead of the Bourbon casks used in the previous three batches.

And it’s not just regular sherry casks but Re-charred Oloroso Sherry casks, making the wood a bit more (or maybe a lot more) active. 15,000 bottles were produced at 57.1%. Let’s check it out!

Nose: Cherries and raspberry chocolate, greenery leaning towards vegetal/farmy side, a bit of wood smoke, cranberries. After a few minutes more dark chocolate (with high cocoa content) and cherries, a minuscule herbal/floral side show up yet still have the dirt and peat in the background to complement and balance the sherry influence. Quite an intense nose! END_OF_DOCUMENT_TOKEN_TO_BE_REPLACED

After reviewing Tomatin 2009 Caribbean Rum and finding it very lackluster, it’s time to move on and check out his big brother, the Tomatin 2006 Amontillado Finish.

It was distilled in 2006 and then moved to Amontillado Sherry Butts in 2015 so it was finished for 3 years before being bottled at the tender age of 12. 5,400 bottles at 46% were produced and like its young sibling it’s non chill-filtered and is natural colored.

The longer finish and higher age are encouraging signs and nurture my hopes that it will be better than the 2009 vintage.

Thoughts: Yes, mucho mucho better than the 2009 vintage. Very pleasant and tasty although it’s quite straightforward with strong amontillado influence of nuts with some chocolate and coffee thrown in.

Last fall, Tomatin distillery released 2 new expressions focusing on the finishes. The younger one is Caribbean Rum finished and the other one was finished in Amontillado finished.

7,200 bottles at 46% were produced and it’s non chill-filtered and at natural color. 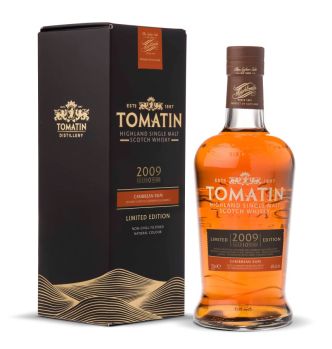