Although not much happened in the last week or two, still there were some interesting news for you to start (or close) the week, and in this edition: Glengoyne & Glendronach.

on 7th November, 7.00pm, there was a momentous event for Glengoyne Distillery, the home of Glengoyne Highland Single Malt Scotch Whisky, as it hosted its first ever live online cask tasting.

Members of the Glengoyne Family signed up to take part in this unique tasting – the first of its kind by a single malt brand – where three specially chosen casks were opened, discussed and tasted by Stuart Hendry, Brand Ambassador and Robbie Hughes, Glengoyne Distillery Manager, live online.

Filmed in Glengoyne Distillery’s warehouse number eight and broadcast by satellite, over 400 Glengoyne fans tuned in from countries around the world including Hawaii, Germany, South Africa and Sweden. Viewers then had the opportunity to vote online for their favourite cask to be bottled. The winning cask was then available for advance purchase online from 8.00pm.

The three casks that were sampled ranged from 25-27 years old. The winning cask was Cask B with 152 votes – 26 years old, distilled on the 19 May 1987, a first fill European oak sherry cask at 54.6% abv.  A bright gold malt with a strong scent of brambles, a sweet blast of honey on the tongue with eucalyptus and oily lemon.

Robbie Hughes commented: “To take three Glengoyne casks and open them for the first time since being filled was immensely exciting. Each cask the same but all have been on a different journey, leading to a distinctively individual malt inside. To be able to share this with Glengoyne fans is incredible and we are thrilled with the chosen bottle, cask B – a perfect addition to the Glengoyne collection.”

Cask C was a close second in the vote – a 27 year old malt with an amber redness, a syrupy nose and a rich, peppery taste. It was the highest abv at 53.6%.

Cask A was a 25 year old malt, dark and rich in colour with a sweet toffee nose and a spicy fruity taste. Its abv was 52.6%.

The recorded production is available to view on the brand’s YouTube channel at  http://www.youtube.com/watch?v=fq0eKuHkBtg

Only 339 bottles will be available to purchase of this limited edition malt from www.glengoyne.com, with an RRP of £350.

Just 500 hand-blown decanters of the rare whisky have been produced, which are engraved with old inlay and individually numbered. 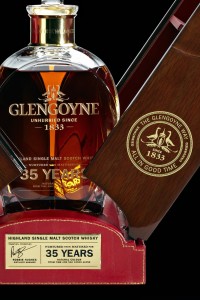 Each decanter is presented in a solid oak lacquered box with a red leather interior, accompanied by an individually-numbered leather book.

The liquid itself has been ageing in Sherry casks in Glengoyne’s traditional dunnage warehouses.

Neil Boyd, director of malt whiskies for Ian Macleod Distillers, said:  “The Glengoyne 35-year-old is an exceptionally rare whisky. Distilled in the 1970’s and 35 years in the making, this rich malt is golden in colour with tropical fruit intensity and a liquorice and dark chocolate finish.

“It’s truly outstanding and the beautifully designed packaging is in-keeping with the distinct, premium and stylish design of the enhanced Glengoyne brand collection, launched last year.”

Back in December last year, the GlenDronach distillery delighted its worldwide 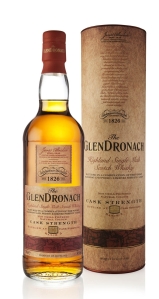 admirers by producing its first cask strength single malt. All 12,000 bottles sold out in a matter of weeks and Batch 2 quickly followed due to popular demand.

Now Batch 3 has been released with GlenDronach’s trademark combination of Oloroso and Pedro Ximenez sherry casks aiding its careful maturation.

The Oloroso influence introduces notes of fruit and toffee while the Pedro Ximenez contribution adds zesty spice – and the result is a truly delicious sherried Speyside malt. Excellent aged oak combines with classic GlenDronach spirit to give a majestic example of an uncut whisky – straight from the cask at 54.9% vol, non-chill filtered and at its natural colour.

Billy Walker’s tasting notes show the wood and whisky have interacted over time to produce a dram bursting with beauty.

Appearance: Hints of ruby through a body of deep golden amber.

Nose: Fantastic waves of soft golden syrup over dates and rum raisins hold a gentle tangerine and ground almond back note. Toasted oak with a dusting of cocoa adds a rich warmth and depth.

Sales Director Alistair Walker said: “We believe this is another GlenDronach gem where spices mingle with the richness of the fruit to give a hugely satisfying malt to be savoured slowly during special, quiet moments.

“We’ll continue to release our cask strength batches as long as this wonderful expression remains popular with consumers.”