Last week, after over 3 months en route, I finally got my final package of whiskies I got myself in Scotland, and it reminded me I didn’t write yet a post on last distillery tour. The last day of trip arrived and we had time for one last distillery visit before going back home – Glengoyne Distillery.

This time we’ve killed 2 birds in one stone – we recruited a designated driver, a blogger who lives not far away but never visited there, so we ‘forced’ him to visit the place for the first time, out own #whiskyfabric cog member, Tom. So we checked out from the hotel, we got picked up by Tom and off we went to the place which is half lowlands, half highlands where Glengoyne distillery resides.

So we went in, discovered we’re on our own on the tour (Yay! Private tour!), payed for the tour and went touring with Ian our guide. We started with having a dram of the Glengoyne 12yo (yummy!) and then went outside and had this lovely view:

What a really lovely view – so different from the distilleries surrounding environments we had so far on our trip and one oh so very beautiful! On we went with the tour, but unfortunately, there’s a strict photo taking policy inside the distillery working area so the post will be sparse with that kind of photos (and info). The tour involves a few stopping points where we taste a few Glengoyne drams and discuss our tasting notes, and this time – the 15yo and the 18yo:

Me on the left, Tom on the right, Rotem & Ian in the mirror 🙂

Ian then demonstrated us the difference on casks internals:

We also managed to take a picture or two of the big operation room of the distillery, but only from the door, not inside the room: 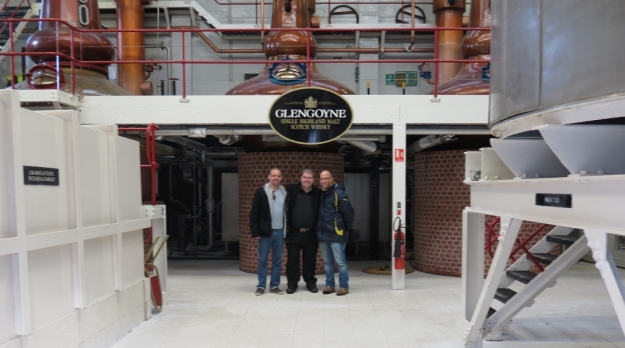 On the tour we stopped by the blending room where we saw this:

We ended the tour at the lovely distillery shop where we had last dram – the teapot dram (want to know why it’s called that way? see here where you can also order one) and we got it served properly – in a tea cup!

We then said goodbye to our great guide Ian, I bought a bottle of the teapot dram (which arrived to my hands only last week, don’t ask why and how) with matching Glencairn glass and then it was time to start traveling back to Edinburgh airport and the long way home.

Bonus: On the way to the airport, Tom did a small detour and we stopped at Linlithgow to see the site where St. Magdalene distillery was used to be. It was closed during the big whisky crisis (when Brora, Port Ellen and others were closed down as well). The place was mostly converted into apartments so we stood outside and took some pictures: 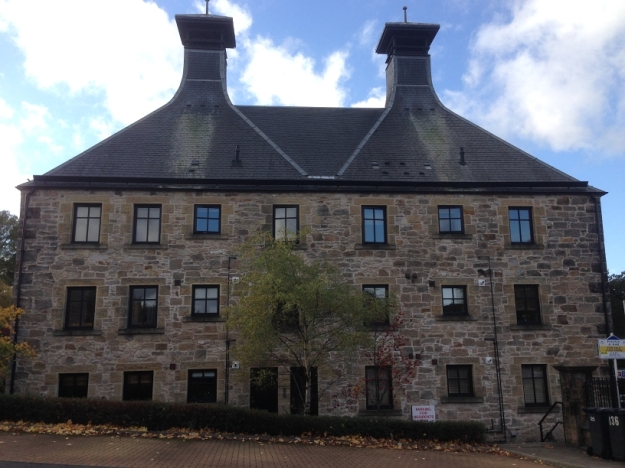 I’m grateful for Tom suggesting this detour and for being our chauffeur on the day (I’m sure he enjoyed touring Glengoyne for the first time too!) and I promise to get back to Scotland sooner then later!

Tour in a nutshell

3 thoughts on “Whisky Tour – Glengoyne Distillery (and a bonus too)”