Update (2/7/2014) – Most of the bottles can be found on auction sites, so no further updates with shop links. If you find a bottle available on a web shop, let me know and I’ll update the post.

Update (2/6/2014) – I’ll update the post in the coming few days (or weeks) with shopping links where available. Be warned there are good chances it will be expensive. Also, I’m sure most of the bottles will show up in the next auctions round so you may want to try your luck there too.

As a whisky geek I’m very interested in the special Festival bottlings and created this post to centralize all available information on them. I’ll update this post once more details on the bottlings will be revealed.

If you look for the full festival information, go to the Festival site at islayfestival.com and you can find the full Islay Festival Distillery Programmes 2014 here

It’s a 12 year old whisky, distilled in 2002 and bottled in 2014 from Refill American Oak Hogsheads. Will go on sale at 10am on Monday 26th May 2014. (From @IslayStudios Twitter feed. Thanks Billy for pointing me at this!) 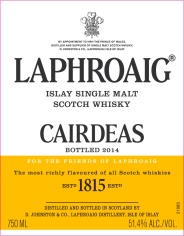 Based on the text printed on the back label it’s a double matured Laphroaig from bourbon casks and Amontillado seasoned traditional hogsheads. (Amontillado sherry is darker than Fino but lighter than Oloroso)

In addition there are 2 more Fill your own bottle:

Matured for over 5 years in two fresh bourbon barrels and finished in a fino sherry butt for 3 months. (Picture found via Abbey Whisky Blog here). Will go on sale on Thursday 29th May.

This is a 10-year-old single malt which was first matured in ex-American Bourbon casks for nine years before being finished for one year in a Marsala cask.

Matured in American oak casks with specially toasted cask lids which were tailor-made for this whisky.