When the topic of whisky independent bottlers is raised, we usually think of the large companies, like Gordon & Macphail, Douglas Laing and the rest of this category. Some people also recognize the lesser known bottlers from UK & Europe such as Van Wees, Blackaddr (and there are many more in this category).

But there’s another category that is mostly overlooked – the whisky and wine shops exclusive releases. Those brave shops owners (or staff members) taste different casks and decide to pick one up, pay the distillery a hefty sum for it , bottle it and to sell it as an exclusive bottle at the shop. It’s not an option for the faint-hearted as it carries some risk like all single cask releases (nobody assure you that your customers would follow you taste) and there’s the “small hurdle” of selling all those bottles!

There are many examples of such shops and bottlings (Green Welly 50th anniversary bottling is the latest example) but in the UK, in the last few years, I think there’s one shop and one guy that stands out above the rest (if you exclude The Whisky Exchange & Master of Malt): Abbey Whisky and its proprietor Mike Sharples. I counted six bottles so far: The rare casks series (four releases so far and a 5th one may be coming), exclusive Glendronach and Kilchoman bottlings – A very respectable turnout!

I’ve been able to lay my hands on a sample of the last release: the Kilchoman one. It has been matured for over four and a half years in a fresh bourbon barrel before being transferred to a Pedro Ximénez cask for a further four months maturation. 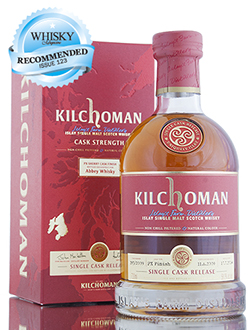 Nose: The familiar Kilchoman profile hits the nose: peat, smoke & ashes, but it’s not harsh and crisp like it used to be as it’s tamed down with sweetness, sultanas, sugar barley & maple syrup. Also make appearance are fresh ripe red berries.

Palate: OK, here the peat is in full blown force: harsher and crispier peat with ashes, tar and smoke but then it get calmer and the fizzy sweet dried fruits comes in to balance it and to tame it further. wafts of weak nutmeg and cinnamon notes are flowing in.

Thoughts: A classic Kilchoman but tamed down just a bit with lovely fresh sweetness. The PX sherry impact is there, lending its features but just enough to smooth out the rough corners of the young Kilchoman spirit. I like this one a lot and it’s an excellent bottling by Mike. I probably should check his other bottlings as well (at least those still available) and so do you.