Laphroaig is my favorite distillery and the next whisky I review here was the first one to utterly disappoint me. When it was released it was following the successful Laphroaig PX Cask (which I love) and so I was eager to try the next installment. When the first reviews trickled in I was really surprised to hear how many were regarding this as a bad Laphroaig and so my urge to buy a bottle was curbed down and I didn’t get to taste it till very recently as I got a sample from a friend.

Laphroaig QA cask is initially matured in bourbon barrels before being finished in charred American white oak casks, so supposedly we should have a tamed down Laphroaig expression, richer in vanilla, honey and spices – does it work well? 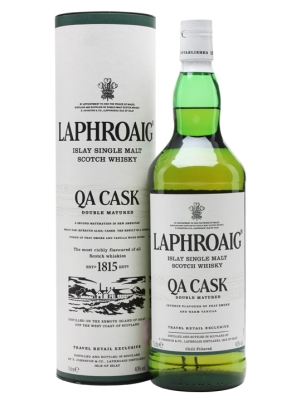 Nose: I instantly recognized the Laphroaig profile. There’re the peat and smoke, it’s very sweet and heavy on vanilla and honey. With some time, smokier, brine, but didn’t find much iodine & TCP. It’s rounded and very tamed comparing to previous OB expressions.

Thoughts: The peat took back seat here and is mostly in the background while the sweet notes, honey and vanilla are on the front seat. It’s supposedly spicy, but that was weak on this front too. Overall it’s a ‘flatter’ Laphroaig.

And then the realization hit me and I finally understood what is the QA cask. The QA cask was a big field test and the Travel Retail market was the field game with travelers as captive guinea pigs. It was the first milestone and a successful experiment showing there’s a market for tamed down Laphroaig and new audience can be reached with such expression. The An Cuan Mor followed as another milestone and finally the Laphroaig Select in its entire glory was brought upon us! Yeah, I know that Laphroaig Select have some sherry casks and QC casks to round the final expression but the main cog is still ex-bourbon and white oak casks and that came from the QA Cask (and An Cuan Mor). Just like the famous saying: Hindsight is 20/20. What do you think?

1 thought on “Laphroaig QA Cask Review and Notes: A precursor and a field test whisky”