It’s this time of the year (Holidays, remember?) and here is another new whisky release we review and this time it’s a new release from John Glaser and Compass box. John Glaser is an artist, admit it. he creates unique blends, and Compass box do some special whisky labels (Hedonism Quindecimus as an evidence for both). This time he go farther and uses an external work of art as inspiration for this new whisky, Ladies and Gentlemen, meet the work of René Magritte – Le Trahison des images (The Treachery of Images). This work from 1929 is far more familiar under another name:  Ceci n’est pas une pipe (This is not a pipe).

Despite the apparently simple meaning of the painting, for this is not a real pipe but a picture and a visual representation of a pipe, this work did invoke over the years a lot of discussions and philosophy debates and John Glaser and Compass box had decided to have their own take on this subject while focusing on what’s closer to their heart: Whisky.

And how? By releasing a new whisky expression called “This is not a luxury whisky”. Brilliant name for a whisky I tell you! and the label and visual presentation aren’t too shabby.

So, what does it means “Not a Luxury whisky”? Isn’t whisky always a luxury. or is it? what defines luxury? I recall seeing an exhibition in Victoria and Albert Musem called “What is Luxury” and I came out of it with no one single and final answer to that as luxury can be a physical thing, or a cultural thing and it can just be a vague and theoretical concept.

You can endlessly talk and debate on this topic, but I think a different platform may be better place for such endeavors while here, on a whisky blog, we’ll focus on the content of the bottle.

There are 4992 bottles of this ‘not-a-luxury’ whisky, bottled at cask strength of 53.1% and once again Compassbox stretch, bend and test the SWA rules by detailing the ingredients that created this whisky (although not on the bottle): 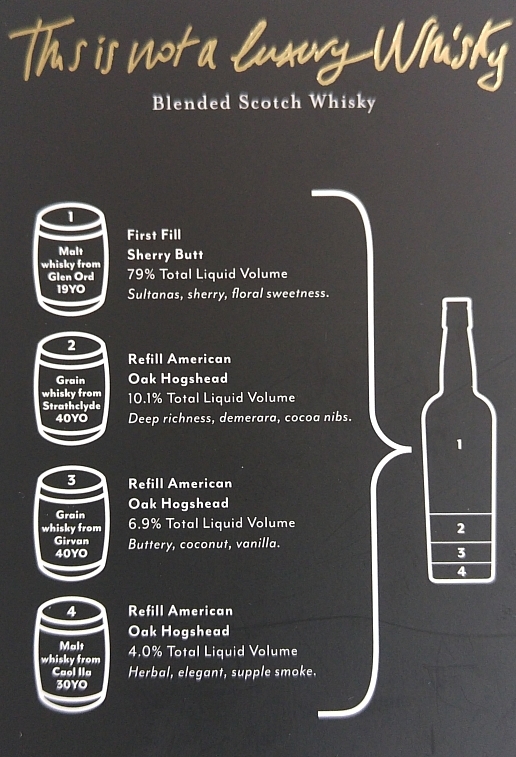 It’s quite an interesting list with sherried 19 yo Glen Ord being the main ingredient taking 79% of the recipe (and sherried Glen Ord isn’t something you’d find on the shelves as single malt – I think I’d like to try something like that!). Also two 40 yo grains from Strathclyde (10.1%) and Girvan (6.9%) and a dash (relatively) of 30 yo Caol Ila (4.0%).

Let’s check if this whisky is a luxury (or not)…

Nose: First there’s a whiff of smoke. Then there’s some grain sweetness, coconut and plastic. Also makes an appearance: musk. It took a while but the sherried Glen ord eventually showed up with dash of flowers and sweet dried fruit note that got stronger with every passing minute, leading to a rich fancy nose going from smoky grain to rich sherried malt.

Palate: That Caol Ila ingredient shows up with peat smoke followed by candied sweet dried fruits. When the sweetness subside, there’s a river of grain bitterness and smoothness flowing below

Finish: The mellow and smooth bitterness from the palate is the backbone here with smoke, peat and sweet red dried fruit on top of it

Thoughts: This whisky needs patience and time. Waiting out will reward you with a rich and interesting whisky. It rotates between sherry and smoky grain and it may not suit everybody but  I find it a unique blend. And now for the $64,000 question: is it a luxury whisky? it’s all in the eye of the beholder! For me it’s not a luxury whisky but it’s all about personal taste. But rest assured that John Glaser knows his stuff and this whisky won’t bore you.