Following the Octomore 7.4 review, let’s keep the Bruichladdich theme for a little more while. Recently Bruichladdich released two new expressions, exclusively to the Travel Retail market and it was an interesting choice to release a young unpeated Laddie with a single digit age statement: the Bruichladdich Laddie Eight.

It it an interesting release for two reasons. The first one is that we have an age statement for young whisky instead of going the more familiar and used route of a NAS release. In fact, it’s the second major release this year to boast such an age after the Lagavulin 8 and both distilleries got praised for this practice of releasing a young whisky without being ashamed of it and I hope more will follow that route instead of the NAS one.

And the second reason is even more interesting if you recall that in the last few years there have been a world-wide supply shortage of Laddie 10 yo. In fact, it is now showing up only at the distillery shop and even that happens very sparingly. So this release, which is probably produced on a more limited base comparing to past Laddie 10 batches, may signal the re-appearance of Laddie 10 in 2-3 years.

And the Laddie Eight itself? As usual with Bruichladdich it carries a higher than usual ABV of 50%, unchill-filtered and the color is au natural. 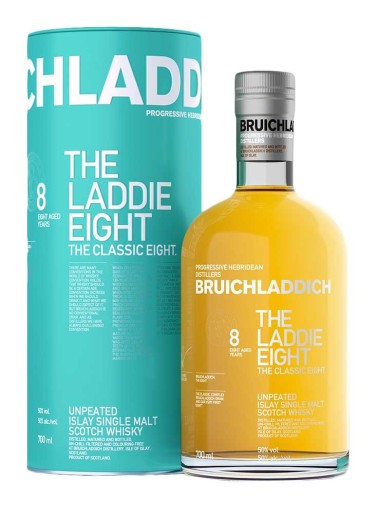 Nose: Very malty at first with cereals porridge, whiffs of orange and tangerines at first, it’s salty beyond my expectations, dusty with limestone as well, honey and vanilla, cut ripe peaches and apricots , minuscule traces of peat smoke, With additional time it becomes cloudy way beyond dusty and deep inhales reveals the funky lactic laddie trademark, and lemon honey.

Palate: Sweeter than I expected after nosing it with fruit, peaches and apricots, dusty, cloudy and intense which must be partially (or wholly) attributed to the high ABV, white pepper, tingling salt, cereals, honey, lactic and oak spices.

Thoughts: Surprisingly matured despite boasting only a single digit age on the label. It’s unmistakable a Bruichladdich and a pretty intense and rich one at that. An excellent choice for last minute shopping at Travel Retail shops across the globe.