Yesterday I wrote I was happy due to the Glenlivet single cask that was released exclusively to the Israeli market but earlier this month there was another sign that we’re getting noticed in the whisky industry: The annual Glenmorangie Private Edition launch events around the globe included Israel as well with a proper launch event by the local Glenmorangie importer (Y.D 1986) and with actual bottles available to purchase on the same day for the same price as most European countries. Another first time happenstance in our whisky history and a good sign to Israeli whisky aficionados.

Now I have to admit that I have a soft spot for this series. Ever since I bought and tried the Glenmorangie Finealta, I’ve been following this series closely and buying a bottle every year for the last few years and so I did purchase a bottle from a local web shop – what a refreshing change, buying and getting it in the same day instead of waiting for the bottle for 3-4 weeks.

However, the review was delayed because after tasting it and checking my notes against the official notes I found out that a major note I found (chalk and rocks) wasn’t anywhere in the official notes nor any note that can be considered as an alternative. That got me worried at first but since I did taste it directly from a new bottle, I thought maybe it needs some time and so I did re-taste it this week and now I was more satisfied as the rocks/chalk note disappeared 🙂

I won’t bother much with the information and story of the bottling, suffice to note it’s around 12 year old – spent ten years as the standard Glenmorangie Original and then around 2 years in those special Madeira casks Dr. Lumsden picked up. 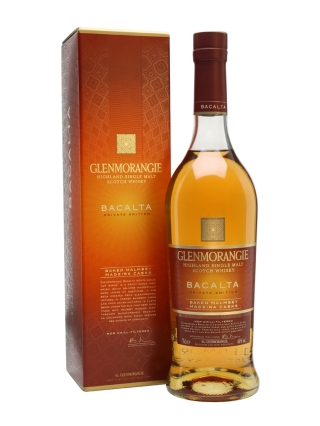 Nose: Oranges and mandarins, soft nuttiness, baked pears pie with strong pastry note, strong and rounded baking spices and hints of canned peaches after a few minutes in the glass. And there’s no doubt it’s a Glenmorangie. When I first nosed it, the first image that pop up in my mind was sitting on warm rocks on a cliff in a hot spring day because there was a strong warm rocks and chalk note that was noticed after a few minutes.

Palate: Starts with baking spices and pepper, the chalk was here as well on my first taste and it was immediately followed by sour sweet citrus, surprisingly a bit more rough than the nose and very un-Glenmorangie like. When it relaxed a bit (time a great healer), it delivered lots of fruit, mainly pears and peaches with a coat of baking spices and oak spices.

Thoughts: At first I didn’t know what do I think of the Bacalta due to the rocks/chalk note, but after 2-3 weeks it sure blossomed into a very nice Glenmorangie, the Madeira impact is here although it’s not as sweet as I expected – I guess that’s a different kind of Madeira I had in mind. Bottom line: I liked it and it’s a good bottling and lets hope it’s a step in re-introducing the Madeira casks back into the official core line up.