Officially it’s Springtime but here we’re having some heat waves and already deeply descended into summer time when drinks are considered. One notable new release I was curious about, thinking it may be a good summer drink is the recently released Compass Box Affinity spirit.

Yes, It’s not a whisky but a spirit because it’s a mix of whisky and Calvados. For those who didn’t encounter Calvados in the past, Calvados is a brandy made from apples (and pears) in Normandy region in France.

Here, look at the recipe: 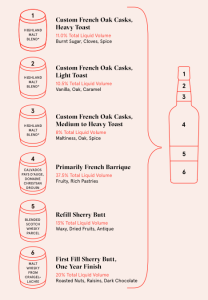 That means we have 37.5% Calvados from Christian Drouin, a very respected and well known Calvados producer and 62.5% whisky .

Nose: Initially doesn’t smell like whisky at all, it’s kinda spirity at times but then the Calvados notes chime in heavily with tons of apples, banana, honey and Calvados oak spice, with some gentle vanilla and honey. After a few minutes in the glass, the Calvados notes relax a bit (although it’s still very prominent) and we get some spices (with white pepper on the front).

Thoughts: A very unique drink. Sometimes it feels like pure Calvados, sometimes it feels like an alien coming at me with a mix of Calvados and strong spiciness with a bitter edge. Compass Box were experimenting with such a mix for a while, pouring from a work in progress bottle in their Whisky Show 2018 masterclass and I can see why they are so enamored with it – It can be a classic summer glass to drink on the garden deck, and even on the rocks on hot days but only if you like it. It’s not a spirit that will fit all – try before you buy!