In the wake of the news of the forthcoming Ardbeg Blaaack (An Ardbeg Comittee for 2020, possibly Ardbeg day release), it’s a good idea to review one of Ardbeg releases and one that was eagerly expected by Ardbeg fans for years – Ardbeg 19 Traigh Bhan.

I remember myself waiting patiently over the years for a new core line-up Ardbeg with a higher age statement from the new regime stock. But when the opportunity to release a new 15,17 (now that could be something – a rebirth of the 17!) or 18 year old expressions has passed without new releases, but then we got the 19 year old.

The new 19 year old Traigh Bhan is now part of the core line-up but it will be produced as an annual batch of unknown count of bottles. What really tickled my curiosity was the fact they said each batch will be slightly different from each other. It dawned on me that Ardbeg are victims of their own success where almost everything they produce goes towards the 10/Uigeadail/Corryvreckan and there’s not enough mature stock from the first years to produce a consistent mature release.

Or maybe they didn’t want to release it but caved under the market and beans counter demands to produce an older expression to sell for a higher price tag?

Either way, I wasn’t going to let this release pass without checking it out! 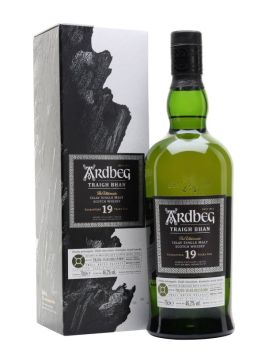 Thoughts: Not exactly what I expected. The nose is pretty good but the Palate and Finish are dragging behind with no added value over the 10 Year Old beyond a gentler and softer peat experience. Can’t see me spending another 200 on another bottle from this batch, but I’m glad I tried it and I’ll probably try next year’s batch when it will be released.