The Myths and Legends series from Compass Box was created to challenge some myths and legends about Scotch whisky which became unchallenged facts by the drinkers. The first member in this series, Myths & Legends I, was matured in first-fill bourbon barrels and re-charred American oak barrels, to debunk the myth that a whisky’s region dictates its flavor – it’s all about the casks.

It was blended from a mix of 2 casks parcels from Balblair Distillery. One from 1997 and the other from 2003 (At least according to the whiskybase.com page), so based on this info, it’s in fact a 16 Year Old (or so) single malt from Balblair, and whenever it’s not a single cask whisky, blending is a crucial part in building the whisky characteristic. 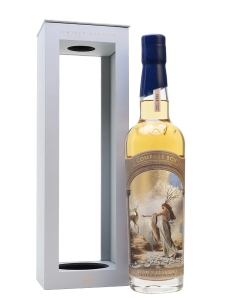 Thoughts: Not so much citrus for me but more like a grand party of apples. It’s quite tasty but also a bit one dimensional with all those apples. As for the myth, I don’t know how those 2 cask parcels tasted but after the blending I wouldn’t guess this to be a Balblair but Glenlivet due to the apples, but then are green apples a Glenlivet whisky characteristic?