Art. Whisky is art and don’t let anyone tell you otherwise. And Whisky that comes bundled with art work is definitly something that catches the eye.

This is the 3rd Peter Arkle limited edition release from anCnoc and this time it’s ‘Bricks’. Unlike the traditional code expressions, this series is sherry influenced and we keep wonder – does this whisky liquid correlate to this name? let’s check! 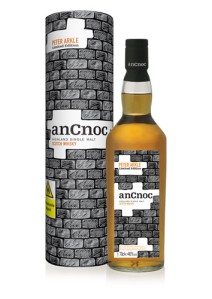 Nose: fruity and sherry influenced, raisins, pineapple. Background layer of honey and vanilla, definitly have some liquerish feeling to it, also some beeswax and plums notes. After few minutes in glass we have spices and honey with dash of lemon

Finish: Dry and medium, some of the bitterness stays on and lingers with spices (mainly cinnamon) and wood notes.

Conclusions: This one shouts dry aperitif. This is not a soft Whisky. Many strong flavors who not fight between them but they still stay distinct – ‘Bricks’ name is very apt!