So after 2+ years of dreaming, 6 months planning, October 2013 arrived and I finally embarked and went on my first ever whisky trip. I wasn’t alone and took with my my good friend Rotem and together we went on a 8 days tour of whisky and some music.

So after 2 flights with lengthy night layover in Istanbul we arrived to Edinburgh, rented a car and went up north to Speyside.

Welcome to Edinburgh! Home of the whisky (sort of)

Initially we planned on going straight up to Speyside region, but a week before the trip, I got a recommendation to stop at Deanston distillery. In Israel, the Virgin Oak and the 12yo are quite popular due their relatively low price (comparing to other whiskies) but what sealed the deal was the promise of special whiskies sold exclusively at the distillery, something a whisky geek cannot refuse 🙂

Deanston is relatively a new distillery, founded at 1965, sitting by by the River Teith near Loch Lomond. The river is their water source and also their energy source – they employ hydro-turbine which provides enough energy for their activities (with some surplus going back to the national electric grid)

The Teith river flows by near Deanston Distillery

And so, after getting lost on the way (Blaming Waze this time who made us turn in the wrong junction) we got to the distillery being late 5 min for the tour. So we hopped in skipping the video and joined the tour group. 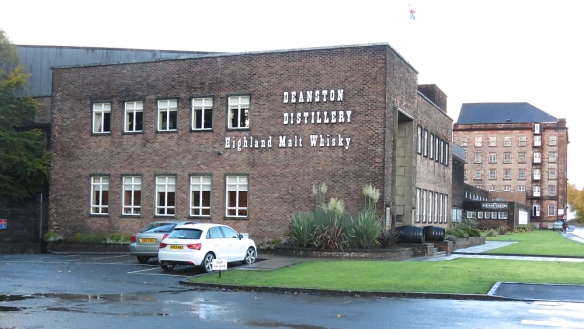 welcome to Deanston, the river is just outside the picture on the right side

Although we were both tired from the lengthy flights, we were very excited to have our first distillery tour, and the smell, ah the smell! First we went through the standard part of the tour involving barley, malting and getting grist out of it.

Fact: Deanston Distillery do not have malting floor and get their malted barley from external sources.

And then we went to the Mash Tun:

It’s one of 5 overall open mash tun in usage across the industry (and the only one we encountered during the trip). As you can see it was in action and the room was full of steam, a very unique experience.

After this, we went through the wash backs where we tasted the ‘beer’, still room with the stills and the spirit safe with very detailed explanation and actual demonstration of how to take a sample and measure alcohol level – nice touch 🙂

when we got to the warehouse we saw this cask: 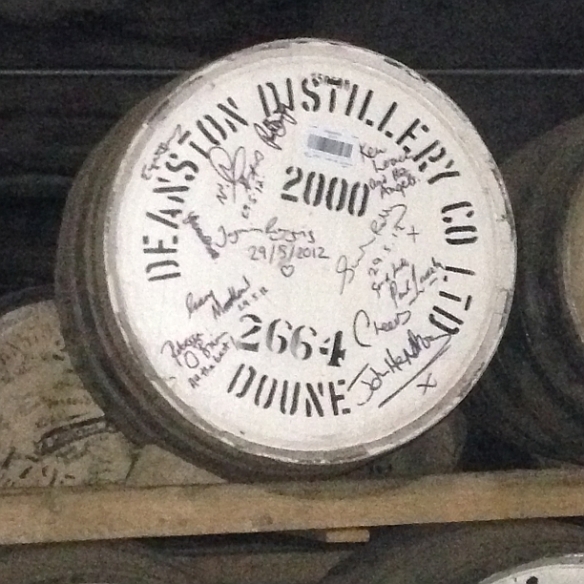 Fact: some scenes of the “Angel’s share” movie were filmed there and the cast has signed a cask which is shown at the front row of the warehouse

After the warehouse visit we went back to the warm and cozy visitors center where we had a dram of the Deanston 12 to close down the tour. While lurking at the visitors center we also tasted the Deanston Festival bottling and the current “Fill-Your-Bottle From the cask” which were cracking. (sorry, no tasting notes this time, no time nor the conditions to have a proper tasting, but I’ll have them eventually)

In the visitors center/shop, you can also find products from the other distilleries belongs to Burn Stewart – Bunnahabhain, Tobermory (including the distillery exclusive bottles of Tobermory and Ledaig). I also picked up malt whisky yearbook 2014 copy for myself.

Donna (our guide), myself and Rotem with the Deanston Festival bottle we purchased

After the tour and the purchased, we went to the The Coffee Bothy, the (very good) distillery cafe to eat something and we had a pleasant surprise of meeting Peter, the man behind Burn Stewart distilleries twitter presence and we chatted for a very short time (too short unfortunately) which concluded our first Distillery tour in Scotland.

Distillery In a nutshell

Tour in a nutshell

Tours availability: all year around (except 25-26th December, Jan 1st), 10:00-17:00, Tours on the hour, every hour.
Cost of tour: £8
Length of tour: 50-60 minutes
Distillery Exclusive bottles: Festival bottling, Fill from the cask, Spanish Oak.
Food: at the Distillery cafe, The Coffee Bothy.