And you thought last week was a busy week with whisky news? hah!

Some good stuff is coming our way (us, whisky customers), read on to find out what to expect (Although the post title reveals most of what you need to know ;-))

Edinburgh based boutique spirits company Wemyss Malts is delighted to announce an addition to its blended Scotch brand, Lord Elcho.

Originally launched in 2012 as a 15 years old blended Scotch, Lord Elcho is now also available without an age statement.

The whisky is named after Wemyss Malts founder’s 18th century ancestor who was a loyal supporter to Bonnie Prince Charlie and led his lifeguards at the Battle of Culloden during the ill-fated Jacobite uprising in 1745. For his part in the uprising, Elcho was stripped of his title and lands and exiled to France, never returning to his native Scotland.

Lord Elcho’s character has been recreated in this new blended Scotch whisky; crafted from a carefully chosen selection of the finest malt and grain whiskies with a high 40% malt whisky content.

The nose on the new whisky is fresh and lively, with notes of fruit salad and fragrant wood shavings. The palate is full and soft, with waves of chewy caramel and a warm spiciness. Its finish is dry and long, with hints of crushed nuts.

William Wemyss, Founder and Managing Director at Wemyss Malts, commented: “The continued growth of Scotch whisky across the world has encouraged us to launch our second entrant into the blended Scotch segment. We expect to bring interest from new export markets with our second Lord Elcho whisky. This excellent whisky is presented in high quality gift packaging.”

In addition, there’s a new batch of single casks: 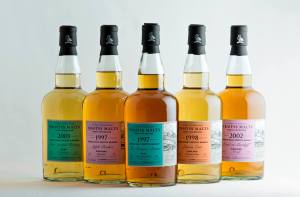 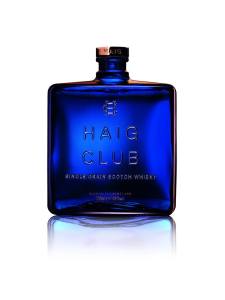 Diageo, the world’s leading premium drinks business, announces today the global launch of Haig Club Single Grain Scotch Whisky, in partnership with global sporting icon David Beckham and British entrepreneur Simon Fuller. Working alongside Diageo, Beckham and Fuller will play a fundamental role in developing the brand, its strategy and positioning. David Beckham will also lead the promotion of a responsible drinking programme for Haig Club, which is at the heart of the brand.

Haig Club is a new innovation from the House of Haig, Scotland’s oldest grain whisky dynasty and makers of Haig Blended Scotch Whisky and Dimple Scotch Whisky. Built on 400 years of distilling history, the House of Haig can trace its whisky producing roots back to the seventeenth century. In 1824 John Haig established the Cameronbridge Distillery and it was there that he pioneered the art of producing grain whisky in continuous Coffey and Stein stills – an invention which laid the foundations for the growth and success of the modern Scotch Whisky industry. Haig Club is born of that Haig family legacy of innovation and excellence in whisky creation.

David Gates, Diageo’s Global Head of Premium Core Spirits, commented: “Whisky is experiencing a continued global renaissance and like many of the world’s most respected whisky experts, we believe this will be the year that grain whisky breaks into the mainstream and gains the recognition it deserves. Diageo has a proven track record in Scotch Whisky innovation and we have applied this expertise through the House of Haig in liquid development and craftsmanship, creating a sophisticated new whisky in Haig Club.

“David Beckham and Simon Fuller are renowned for breaking boundaries and shaking up markets in every sector in which they work. We are immensely proud to partner with them on our first large scale grain whisky innovation.”

Beckham commented: “The House of Haig has a rich history and I’m proud to be working at the heart of a home-grown brand which has built an incredible heritage over 400 years. Working closely with Diageo, we look forward to collaborating on Haig Club, valuing and treasuring the Haig traditions while reinventing this whisky for years to come.”

Simon Fuller said: “This is a long term commitment. It is important to us that we create something unique and of great quality. With Haig Club we have an opportunity to push boundaries and help shape how Scotch will be perceived in the future, it’s an exciting proposition. We could not wish for a better partner than Diageo.”

Syl Saller, Diageo’s Chief Marketing Officer said: “We see this launch as a terrific accelerator for the whole sector, and one that really strengthens whisky’s position as the most vibrant spirits category.

“Consumers are constantly searching for new and different tastes and experiences and they are especially excited by those that come from authentic, heritage brands. And Haig Club certainly ticks those boxes. Throughout his career, David Beckham has been at the forefront of emerging trends and rewritten the rules of what it means to be a modern sportsman and businessman, and we are pleased he has decided to turn his hand to Scotch.”

Haig Club has been crafted using a unique process that combines grain whisky from three cask types. This creates a fresh, clean style that showcases butterscotch and toffee for an ultra-smooth taste that the company believes will be enjoyed not only by current whisky drinkers, but also by those who have always wanted to try whisky.

Respected whisky authority Dave Broom is one of the few drinks experts to have tasted Haig Club. He described it as “a hugely versatile spirit, and I expect bartenders will love what they can do with it. Forget everything you thought you knew about Scotch…”

Haig Club will be launched later in the year.  Details around pricing and availability will be announced nearer launch.

Haig Club is created from grain whisky from Cameronbridge distillery, home of the low-volume Cameronbrig single grain whisky and will launch as a 40% abv, no-age-statement product comprised of a variety of aged whisky from three types of cask: first-fill, rejuvenated and refill Bourbon barrels.

This is the second Loch Gorm Single Malt to be released. The first, which was released in April last year, was awarded the prestigious 2013 IWSC Gold (2013 edition). Each release is differentiated by the distillation and bottling dates on the front of the bottle and carton.

Fully matured from filling to bottling in fresh Oloroso sherry butts, Loch Gorm adds a new dimension to Kilchoman’s portfolio, bringing a depth of character and colour to the Islay Single Malt. The Loch Gorm range is the only all sherry cask-matured expression from Kilchoman.

Loch Gorm is bottled at 46% ABV and will be available from specialist drinks, whisky stores and online, priced at a RRP of £55-£59.

Following on from the launch of our standard batch release Cù Bòcan Highland Single Malt Scotch Whisky at the end of last year, we are delighted to announce the release of our first limited edition expression for the range.

Casks 37470, 37471 and 37472 have been lurking quietly in Warehouse 9 at Tomatin Distillery since a rare and unintentional production of peated whisky at the distillery on 7th June 1989.

Now the beast has been unleashed in this sweet and smoky rare edition of Cù Bòcan.

This limited edition has been released at cask strength, non chill filtered and natural colour. The smoke is more prominent than in the standard edition but retains the instantly recognisable sweetness.

NOSE: The initial smoke is light, like distant burning kindling and has a heathery character which quickly gives way for fresh fruits – pear accompanied by citric lime zestand sweet pineapple. After time in the glass it becomes much sweeter with honey, vanilla, coconut and custard. Herbaceous notes of basil and rocket.

AROMA: The smoke and the floral heather notes are more prominent on the palate. Sweet abundance of fresh fruits; orange and grapefruit followed by blackberry and blueberry. Some ginger and clove spice is also hidden in the background.