Another week full of new whiskies announcements. Glenmoranige release their ‘rarest’ whisky to date (and most expensive!), Old Pulteney (2nd week on the chart! ;-)) with Commemorative Bottling and Diageo releases a Kininvie 23 yo 2nd batch (FYI, first one was Taiwan only).

Soon (maybe even next week), we’ll have official release of Bowmore Devils Cask II (AKA Batch 2) and Glendronach Batch 10 single casks (already available for order from The Whisky Shop, (£66 for 2002 vintage up to £152 for 1990 vintage). Phew, quite a lot ah?

Glenmorangie has unveiled what it claims is its rarest, “most exquisite” and most expensive whisky to-date, called Glenmorangie Pride 1978.

The 34-year-old single malt, of which only 700 bottles will be available worldwide, initially started out as a 19-year-old vintage before being extra-matured in French Premier Grand Cru claret casks for an additional 15 years.

After laying down just five casks of the whisky, Dr Bill Lumsden, director of distilling and whisky creation at Glenmorangie, said this was the most the brand’s “most exquisite” edition to-date.

“The resulting liquid is a luxurious burnished copper with rich, decadent and delicious scents of chestnut, toffee and cherries,” he said.

“I believe this is my most exquisite expression yet, one that will be savoured by whisky enthusiasts across the globe.”

“I am absolutely delighted to work with Glenmorangie,” said Khan. “When visiting the distillery in Tain I was immediately mesmerised.

“The vision of the casks has stayed with me and provided inspiration for ‘Disappearing Casks’. I was born the same year that the casks were laid down and it feels very fitting that I am helping to tell its story.”

Bottled at 47.4% abv Glenmorangie Pride 1978 carries an RRP of £3,400 and will be available from Glenmorangie’s online shop as well as from specialist retailers and department stores.

Kininvie 23yo Batch 2 Is Now at The Whisky Shop

Kininvie is a unique single malt distillery founded on 6 copper stills nestled in the Conval hills of Dufftown, Speyside.

First opened in July 1990, it has taken three decades of quiet, patient and devoted care to get to this point . A treasured secret known until now by only a few, Kininvie is at peak perfection – and now the first house malt is ready for release in the UK.

The brand new Kininvie 23 year old has been made in small batches, every bottle will be individually numbered and housed in 35cl bottles. Each batch number and year of distillation will appear on the label. This scarce 1990 UK release contains malt whisky from the very first distillation, matured in a mix of American hogsheads (80%) and sherry casks (20%).

Palate: Beautifully soft and mellow with a luxurious silky texture. The rich vanilla oakiness resulting from 23 years of maturation gives an incredible depth of flavour and sweetness. Woody spices such as cinnamon, nutmeg and cloves are layered with zesty citrus and candied orange peel.

The bottle is available for £97 at The Whisky Shop 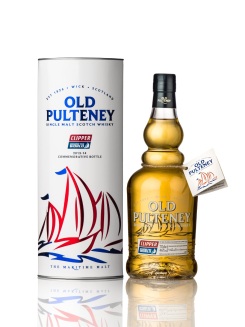 This week Old Pulteney – The Maritime Malt – celebrates the completion of the Clipper Round the World Yacht Race 2014 by the crew of brave men and women on board a yacht named after the iconic Single Malt Scotch Whisky. The race started eleven months ago and saw the Old Pulteney rose of winds carried proudly to France, Brazil, South Africa, Australia, Singapore, China, United States of America, Panama, Jamaica, Northern Ireland, The Netherlands and back to the starting point in London, UK. The brand’s involvement in this classic feat of sea adventuring is a natural continuation of the long and rich maritime heritage of the town of Wick on the Caithness Coast in the Northern Highlands of Scotland, where Pulteney Distillery was built in 1826 and where it produces its multi-award-winning Scotch whisky until this day.

The staff and management at Pulteney Distillery took the opportunity to thank all the crew members and the Skipper Partick van der Zijden for their tremendous effort and for representing Old Pulteney all around the world this past year. The Old Pulteney crew have shown rare determination and courage and successfully completed the race despite seemingly insurmountable obstacles. Margaret Mary Clarke, the Old Pulteney Global Brand Manager, said:

“As a whisky built on its maritime history and connections, it has been an enormous thrill to be part of the Clipper 2013-14 Round the World Race and to have witnessed the ‘Old Pulteney’ speed from port to port over the past year.” 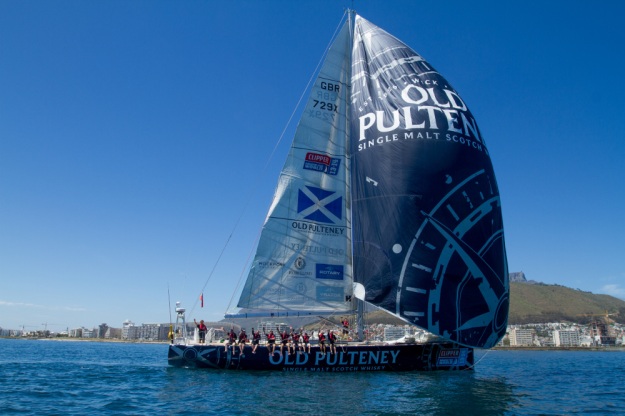 To mark the occasion Old Pulteney will release a special commemorative bottling of its whisky. Old Pulteney Clipper will be made available in July 2014 at select retailers world-wide. The limited release will feature a Clipper Round the World Yacht Race -themed packaging and the whisky itself will be a classic expression of Old Pulteney, matured in both ex-bourbon and ex-sherry casks. The whisky will be presented at its natural colour, non chill-filtered and at a premium strength of 46% ABV. Only 2,700 cases of this rare bottling will ever be released and the recommended retail price in the UK is £50.

The appearance of the whisky is that of polished gold. On the nose the sweetness of dried fruits and crispiness of green apples is accompanied by notes of fresh vanilla and white chocolate. On the palate waves of honey and orange zest, a rounded oaky structure and an unmistakable coastal note set this fresh and elegant Old Pulteney apart. The finish is smooth and long-lasting.

The heritage of Old Pulteney Highland Single Malt Scotch Whisky is closely interwoven with that of the port town of Wick. Once a thriving herring fishing port where as many as one thousand vessels could crowd the harbour in the fishing season, Wick was famously reported to produce ‘barrels of silver’ (salted herring) and ‘barrels of gold’ (single malt whisky). Set up to quench the thirst of a busy port, the distillery soon became recognised for producing one of the finest spirits in the world. And even though the fishing industry in Wick is well past its prime, traditional production methods, a wealth of experience and the coastal location which lends a distinctly maritime character to the whisky, keep Old Pulteney firmly in the whisky lover’s spotlight.