Lately I’ve been doing a few reviews (when I wasn’t too busy with life) of multiple bottles, and while I don’t think it’s gonna be a permanent thing and I do plan to do single whiskies reviews, I do have another duo review today – two world whiskies matured (fully or finished) in peated cask, ex-bourbon only, both from climates which leads to rapid maturing. So they share common traits but there are still some glaring differences: different distilleries in different regions in the world and different climate. Single cask vs vatting of a 2-3 casks. The Amrut was finished in peated cask while the Kavalan is fully matured (or so I assume) in peated casks.

Nose: Rich and buttery with strong impact from the bourbon cask. fruit perfume and then intertwined smoke, wood glue, vanilla and honey, Not a usual combination but it works real well. And then there’s even some sweet corn! With a few drops of water: more fruit sweetness. END_OF_DOCUMENT_TOKEN_TO_BE_REPLACED

Whisky is favorite spirit drink but I also like a good glass of proper rum (preferably without added sugar or other additions), so I’m a big fanboy of whisky matured (or finished) in a rum cask, and I’m not the only one in my friends group.

Then came the opportunity to taste and compare two whiskies which are almost twins. They were both distilled in same distillery  (Amrut distillery), probably of the same age (or close to) and bottled by the same bottler (Blackadder) so there’s a pretty good chance both casks may come from the same casks batch purchased by Blackadder. But then, I said they are almost twins, just almost and that’s because there’s one big influential difference – The Rum type.

Nose: The bourbon cask used for the bulk of it’s maturating is undeniable here with strong maltiness, honey, dust and spices. But there’s added sweetness from the rum cask – Banana and demerara sugar along with menthol, now some coconut and dried apricots. END_OF_DOCUMENT_TOKEN_TO_BE_REPLACED 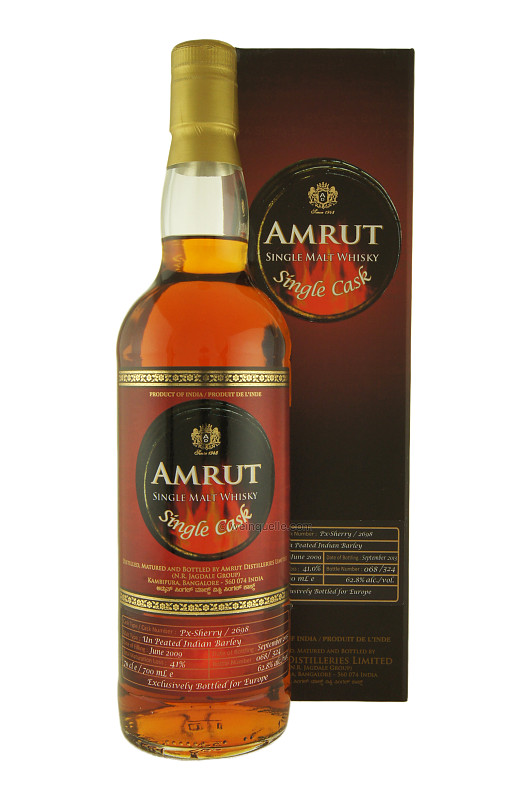 As one who doesn’t live in the UK/Scotland, it’s no wonder I have a ongoing love affair with world whiskies. quite earlier in my single malt whisky road I purchased and tried couple of world whiskies from Japan, South Africa, Europe but somehow one important market eluded me – India, at least until now.

There are 2 known single malt whisky producers from India: Paul John and Amrut and I finally got to taste one of Amrut single cask expressions – a PX sherry cask distilled on June 2009 and was bottled August 2013. Yes, only 4years old one but it should not come as a surprise as Indian whisky isn’t aged for long due to the hot and humid climate there. Amrut rarely age their whisky over 4 years as the angel’s share is x5-x8 than the usual one in Scotland (their oldest expression is 8 years old)

So a 4 years old whisky from PX sherry single cask – is it a sherry bomb or not?