Well, well, see who’s back? the devil has returned for a second round!

Following the HUGE (huge? Godzilla was dwarfed in comparison) success of the first incarnation of the Devils Casks release in 2013, Bowmore has released the 2nd batch a while ago. And guess what? It took less than a nano-second to get sold-out across UK/Europe. As with the first batch, bottles are available in auctions for x4 (and more) of the original price.

I loved the first batch (see my review here) after getting a sample from my friend Ben (of Ben’s Whisky Blog) so I thought of getting a bottle of the 2nd batch but I didn’t really have a chance as my favorite stores didn’t get any serious bottles allocation (1 bottle in some cases!). But then Ben came to the rescue as he managed to get a bottle of the 2nd batch as well (and he opened it! and drink it! not flipping in auctions!) and generously sent me a sample of it.

So, will I love the 2nd batch as I loved the first one? Also, should I build a shrine for Ben? 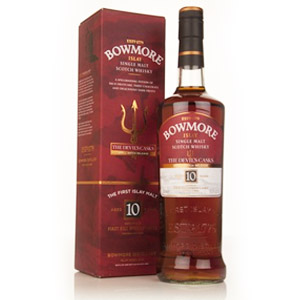 Nose: Started with big hit of berries and red fruits. After it subside a bit there’s some clean peat showing up accompanied with smoke but the fruits and sherry still takes the front seat. I was surprised to nose some acetone/grainy notes but it happened briefly and one time only. Then there was some Chocolate filled with cherries cream and overall it’s a clean and fresh nose. After a few minutes the peat gets stronger and a bit dirtier with soot.

Finish: Long finish with strong charred oak (but not bitter) with lingering sweet berries and traces of nutmeg and cinnamon.

Thoughts: It’s a good Bowmore whisky. But (There’s always a but) I consider the first batch to be better. It’s clear that Bowmore hit some gold spot with this series as evident by the hype and the lack of bottles in stores, and I’d love to get a bottle of either batch (although I’d prefer the 1st one) for RRP price but sadly that’s ain’t gonna happen. But if you see that bottle in RRP price, do me a favour – buy it, open it, drink and spread the good whisky around.